Although Vedder possessed a feverish imagination, little of it is evident in this painting, which he made for the financier J. Pierpont Morgan. The general effect of the picture is that of an antique sculptured frieze. Behind the graceful young figures, the shallow stage is bounded by a sea of gently rolling waves, and, in front, concentric arcs of foam mark a receding swell. Vedder began his training in Paris with an Academic follower of Jacques-Louis David, and spent most of his long career in Italy, chiefly in Rome. The painters of the Renaissance, especially Michelangelo, were his primary inspiration, but he was influenced too by the mystical art of the Englishman William Blake. Vedder obtained immense popular success with his series of illustrations for the 1884 edition of the “Rubaiyat of Omar Khayyam”. 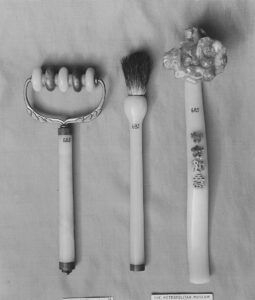