Over the past two years, a confluence of factors have led to a worldwide shortage of fertilizer, spurring everything from clashes with police in India and soaring food prices in the U.S. to potential crisis for truck drivers in South Korea. But in Vermont, an unlikely set of heroes have stepped up to combat the problem: zealous peecyclers.

This intrepid army, laden with a liquid stream of might, is part of a growing movement to recycle their own waste for the benefit of the planet and its people. Urine, as it turns out, has the same nutrients—namely, nitrogen, phosphorus and potassium—that farmers use to feed crops, usually in the form of industrial fertilizer.

While those nutrients occur naturally in pee, the manufactured stuff relies on fossil fuels for production. Manufacturers use natural gas or gas derived from coal to produce ammonia, which in turn yields synthetic urea. That process, according to Chemical & Engineering news, contributes to at least 1% of CO2 emissions each year. Yet the fertilizer from that process is critical to growing food—the amount of ammonia that’s processed for fertilizer contributes to 50% of the world’s annual food production. That degree of dependence, combined with a sharp rise in fertilizer’s financial cost and its environmental toll, has made the need for an eco-friendly, lower-cost substitute only more urgent.

See also: Can we end food insecurity without destroying the planet?

According to a June 17, 2022 article in the New York Times, that’s where the peecyclers come in. In her piece, Catrin Einhorn wrote:

“Beyond the practical benefits of turning urine into fertilizer, some are also drawn to a transformative idea behind the endeavor. By reusing something once flushed away, they say, they are taking a revolutionary step toward tackling the biodiversity and climate crises: Moving away from a system that constantly extracts and discards, toward a more circular economy that reuses and recycles in a continuous loop.”

In Vermont, organizations like the Rich Earth Institute are both evangelizing the benefits of natural fertilizer and putting its research into practice. The group collects urine from a few hundred volunteers and, each spring, distributes it to farmers in the region. So far, local growers are embracing this natural alternative. Einhorn writes:

“We see very strong results from the urine,” said Noah Hoskins, who applies it to hayfields at the Bunker Farm in Dummerston, where he raises cows, pigs, chickens and turkeys. He said he wished the Rich Earth Institute had more pee to give. “We’re in a moment where chemical fertilizer has more than doubled in price and is really representing a part of our system that is way out of our control.”

Vermont isn’t the only place pushing for the adoption of human-made fertilizer. From Cape Town, South Africa, to southern Niger, more municipalities, researchers and citizens are getting in (or rather, letting go) on waste diversion. In Paris, France, 600 new apartments will be designed with pee-diverting toilets. That’s good for farming, for emissions, and water conservation.

Despite the so-called ick factor (urine does, of course, pack a pungent punch), at least some people in the emerging movement are having fun with the subject of their industry. Rich Earth Institute’s pee-delivery truck, for example, has a license plate that reads, “P4FARMS.” Meanwhile, the organization’s education director, Julia Cavicchi, likes to quip, “Hashtag PeeTheChange.”

She told Einhorn, “Puns aren’t the only reason I’m in this field,” she added, “but it’s definitely a perk.” 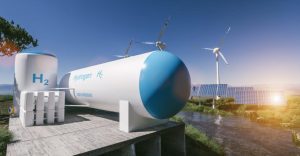