Humans are the cause of most current environmental catastrophes. From oil spills, to leaking toxic landfills, to Chernobyl, humans are directly responsible. We have become a serious threat to the survival of our planet. But here is a case in which Nature comes to the rescue – when mushrooms clean up oil spills!

The Power of Mycoremediation

Mushrooms are the composting masters of the world. They are known for their ability to heal the earth and restore balance to ecosystems. Peter McCoy, the visionary behind Radical Mycology, showed us how this mind-blowing process unfolds through a small-scale art exhibit.

This one was trying to replicate an oil spill on a very small scale so people can understand one way that we can work with mushrooms that are quite dramatic in a relatively practical and straightforward way. This is arguably one of the easier remediation practices working with mushrooms cleaning up chemically occluded soil.”

Basically, mushrooms can “eat” or break down nasty chemicals.

This process is called mycoremediation, and it is being studied and implemented by scientists today. Some even suggest that we put “Mycological Response Teams (MRTs) in place to react to catastrophic events, from hurricanes to oil spills. We need to preposition composting and mycoremediation centers adjacent to population centers.”

One plan to use fungi in this manner made frontline news. The Texaco company has been testing mushrooms in the Amazon for nearly twenty years as a method for soaking up oil spill damage. Mycoremediation literally means to restore balance, and nature has many more lessons to share with us about how to keep ecosystems in balance.

This video from Peace Trees helps explain how mycoremediation works:

A Solution to Pollution – Mycoremediation

The role of decomposition is not the most attractive, but it is the most essential.

Without mushrooms, it would be much more difficult for plants and other organic material to decompose. That would mean diminished soil quality and could result in a total breakdown of the natural food chain.

In the end, deploying natural techniques to solve man-made crises is an excellent idea. But it must be a complement to the activists who are working hard to stop these disasters from occurring in the first place. Hopefully one day there won’t be any oil spills, but for now, we know mushrooms clean oil spills! 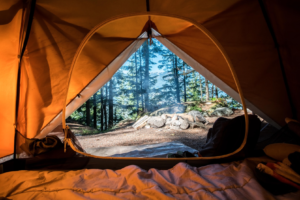