At first blush it seems like there might be a disconnect between the practical ideas and execution of high fashion and the potentially abstract idea of sustainability. The United Nations defines sustainability as “meeting the needs of the present without compromising the ability of future generations to meet their own needs.” Luxury goods, as it happens, straddle both sides of this equation, with profit and exclusivity driving the business model and durable, high-quality products that can be passed down or re-used on the other. Did you ever think you would see mushrooms on the runway?

In his article in Forbes, Stephane JG Girod illustrates this paradox by describing an emerging phenomenon in which sustainability-conscious consumers order new clothes online, pose with them on Instagram then return them. Yet the result is, in sustainability terms, a significant environmental cost.

On the other hand, Girod writes, among luxury designers and manufacturers there’s also a new push to cut CO2 emissions, up use of renewable materials, make shipping less environmentally harmful and lean into certifications such as Fair Trade.

This increased awareness was recently on display in Paris, when one of Stella McCartney’s fashion lines previewed. The presentation included a voiceover from American mycologist Paul Stamets saying, “In fashion mushrooms are the future.” His voice was over a soundtrack of synthesizer music created by the amplified sounds of mushrooms growing. The clothes themselves featured mushroom shapes and hand-drawn fungi. (For photos and more details, peruse Vanessa Friedman’s New York Times article, which touts products made from mycelium leather.)

McCartney, however, isn’t the only designer embracing a new way forward for sustainable materials.

Gabriela Hearst, who also designs for the McCartney line, is deeply committed to sustainability and the preservation of the planet. She grew up on a farm in Uruguay where she learned that everything on the farm gets used for something. That practice translated into utilitarian skills that made it possible for her to concentrate on sustainability in her design process.

In a CNN.com article on her website, she was quoted saying, “We live in a world that is overproducing things that we don’t need.” When she starts working on a new garment or accessory she asks herself, “Is it saving water? Is it using less fossil fuels? Can we transport it by boat instead of a plane?.”

While speaking on a panel at this year’s United Nations Climate Control Conference, she said, “it will be the artists and scientists that get us out of this, not the politicians.”

For more about Hearst and her work visit her website at gabrielhearst.com.

Let us know what you think about mushrooms on the runway! What else would you do to make clothing more sustainable? 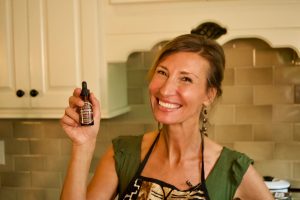