As far as tragic natural histories go, there are few more consequential than the loss of the American chestnut. Known also as Castanea dentata, these massive trees were once a source of food for wildlife and humans living in eastern parts of North America. The timber produced by the American chestnut was considered especially hardy. These trees would grow to massive heights; their straight, sturdy trunks were particularly coveted by shipbuilders in search of good masts. Before the 20th century American chestnuts comprised roughly one in every four trees in eastern hardwood forests in the US. That all changed when a deadly fungal blight began to decimate the population. Enter the American chestnut hybrid.

The State of the Chestnut

For years, scientists have made efforts to restore this tree to its former glory. Very few American chestnuts can be found growing wild, and because the fungal blight is still around, it can still harm new trees before. Although pruning strategies allow these blighted trees to continue growing (the root systems are not damaged by the blight), they don’t often grow very tall under these conditions.

Now, researchers at SUNY College of Environmental Science and Forestry may have found a possible avenue toward restoration: by incorporating the genes of a wheat species that can interact with the fungal chestnut blight and detoxify it, these scientists may have developed a completely blight-resistant species.

Although the research so far is promising, there is a controversy over using genetic modification to restore the American chestnut. In addition to concerns about consuming chestnuts produced by genetically modified trees, there is also the question of whether this new species of tree can even really be considered an authentic version of the original. Some environmentalists claim genetically modified species could have unintended consequences. Research so far has demonstrated that this species of chestnut is safe for human and animal consumption, but there’s debate over whether or not the species should be widely introduced.

The FDA will soon rule on whether or not to allow this new species of chestnut to be planted, potentially ushering in a new era for this once-great species. What do you think of the American chestnut hybrid trees? 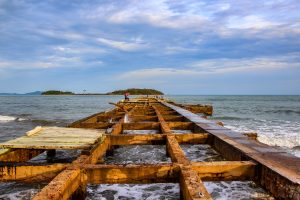