Blue Zones are places on the planet where people live much longer than anywhere else–a kind of fountain of youth. In these regions, as many as one in three people live to be over 90 and experience much lower incidences of dementia and other end-of-life illnesses. They also see lower rates of cancer and heart disease. The Nicoya Peninsula is the premiere blue zone on our planet!

According to BlueZones.com there are five main regions of this type. Sardinia, Italy, holds the record number of centenarians and is considered the place where people live the longest. The islands of Okinawa, Japan, also have a long life expectancy, as does Loma Linda, California. Ikaria, Greece, has a population that lives long and avoids disease. Yet the fifth of these zones, Costa Rica’s Nicoya Peninsula, may be the ultimate example.

Where Is The Nicoya Peninsula?

The Nicoya Peninsula is an 80-mile stretch of land just south of the Nicaraguan border. It’s an extremely popular vacation destination, according to CostaRicaExperts.com, and that’s only become more true since it was highlighted as one of the world’s Blue Zones. National Geographic writer and author Dan Buettner traveled to the world’s regions with the highest longevity and was able to identify the commonalities in these countries. It has led people seeking to find this kind of health and longevity in their own lives to travel to these areas.

Learn more about the magical Nicoya Peninsula  from this travelogue video created by YouTuber Gabriel Traveler:

The commonalities referred to above have been condensed into a practice called Power 9:

People in the blue zones tend to move more naturally. They walk, run or swim; they go to the market, they walk to friends’ houses, and go about their business using their bodies often and naturally. They’re not sitting in cars for hours a day or slouched in their chairs.

Nicoyans call it the plan de vida. Having a sense of purpose in your life and knowing why you get up every morning is a huge part of maintaining your desire to live every day to the fullest.

You can’t avoid stress entirely, but you can try to minimize and mitigate it. Don’t do things that are going to stress you out for little gain. Know your limits. Not everyone is built for “the grind,” there’s no shame in living a simple life. Ensure you have rituals to manage your stress, such as yoga, meditation or exercise.

In the Blue Zones, people take their smallest meal in the evening. Furthermore, they report only eating until they’re about 80% full. Eating to excess is not healthy, though it may be tempting at times.

Residents of Blue Zones don’t eat much meat and minimal dairy. Beans, vegetables, and wheat products make up the majority of their meals.

They drink wine in moderation, quite regularly.

7. Belonging to a Group

You can add four to 14 years of your life by joining a community linked by common interests, beliefs or faith.

Blue Zone folks really prioritize their family. It’s not uncommon for multiple generations to live under one roof in harmony. Familial closeness is a huge focus and one of their primary values.

Folks in the Blue Zones have strong social networks that they maintain until they are more than 100 years old. Friends are as valuable as gold when it comes to our health, maintaining long fruitful relationships is a great way to enhance our mental and physical health for the long term.

If you get the chance to travel to the Nicoya Peninsula or any of the other Blue Zones, then take advantage of it: research how locals live while you’re there. There’s a lot to learn from other cultures, and particularly those that value quality of life. And whether you visit a Blue Zone or not, it’s still worth incorporating some of the Power 9 into your daily life, including trying foods and recipes inspired by these regions. Hopefully the combination might inspire you to harness the magic of these Blue Zone experiences. 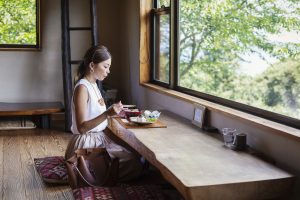 Mindful Eating 101: How to Try This Approach to Wellness and Life

Mindful Eating 101: How to Try This Approach to Wellness and Life

What to Know Before Keeping Chickens in Your Backyard