Often synonymous with pies of the past, rhubarb–that reddish-green stalk of a plant with a bitter taste–came into fashion in the 19th century as an ingredient in desserts when, according to MyRecipes.com, sugar became widely available. But the old-fashioned food is making a comeback. Rich in antioxidants and loaded with anti-bacterial and anti-inflammatory properties, rhubarb is packed with healthy nutrients. With versatility that allows it to become a healthy dessert or add texture to savory dishes, experts recommend trying rhubarb in season and trying new recipes.

While the distribution of sugar made rhubarb’s appeal more widespread, people have been consuming it for centuries. There’s even a tradition of growing the vegetable by candlelight to give it extra sweetness. In one piece, the BBC points out that this tradition of cultivating “forced rhubarb” has been “cultivated from Siberia to China as far back as 2700 BC, [the rhubarb] was used for its healing properties, it was transported along the Silk Road to Italy in the 13th Century by Marco Polo.”

More recently, rhubarb’s been making a reappearance from upscale restaurant dishes to booze. A new brand of gin has incorporated rhubarb into its recipe, too, combining ancient wisdom with modern perspectives. Elsewhere, in an area that’s known as the Rhubarb Triangle in West Yorkshire, England, the vegetable plays an important financial role. From the BBC story:

“’In this area, it represents innovation and opportunity and it’s an economic lifeline,’ says Richard
Holmes of Cryer and Stott, a cheesemonger with a line in forced rhubarb-flavored Wensleydale
among its 600 other cheeses.”

With an uptick in popularity, rhubarb could soon be making appearances on food and drink menus worldwide, to say nothing of sprouting in backyard gardens across the globe. Ready to give it a try? Grab some rhubarb in season this year. Let us know what you make. 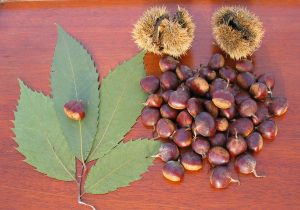