How Rob Greenfield Built a Homestead from Scratch

Whether you’re starting a home garden or building out your own homestead, you’re probably going to seek out green-thumbed experts on the internet or stock up on books by seasoned horticulturists. But you may find some encouragement (and actionable tips) in the testimony of someone else trying it out for the first time. Enter Rob Greenfield, leading by example and inspiring us all to go green.

Back in November, 2019 Greenfield took on an ambitious new project—to grow and forage 100% of the food he consumed for an entire year (no grocery stores, no farmers markets, no restaurants and no borrowing). After nearly a decade on the road, he settled down in Orlando, Florida, on a property that he agreed to convert into a sustainable homestead in exchange for the right to live there rent-free for the year. This was admittedly a big undertaking for someone with limited experience in the food-growing field. But he gave himself an advantage: his strategy was to stick with only the plants that were known to thrive locally.

The roof over his head was that of the 100-square foot tiny house that he built himself out of repurposed building materials. One of the coolest, renewable energy features of the homestead was a stove from HomeBiogas, which turns food waste into cooking gas (methane) and fertilizer using a mechanism similar to the human stomach.

Rainwater powered a handheld shower as well as an outdoor kitchen sink, using biodegradable soap that seeps straight down into the soil that feeds banana plants. And the same rainwater was used in a Berkey filter system for potable water. The outhouse, meanwhile, featured a closed-loop composting system and a nearby blue spur flower, which is Greenfield’s favorite all-natural toilet paper. (To learn more about this, see Rob’s article 10 Ways to Wipe Your Butt For Free (Alternatives to Toilet Paper).)

Greenfield converted the entire front lawn into the main garden, with other gardens scattered in a network across the neighborhood, featuring more than 100 different species. He even rescued bees and raised them for harvesting honey. His main protein source consisted of peas and fish (from local water sources).

The list of resources Greenfield used goes on and on, but to see the real magic of the project, watch how he did it here. In this video on his YouTube channel, he gives a guided tour of the homestead as he was living in it (more than two million people have viewed it!): Simple and Sustainable Living in My 100 Square Foot Tiny House.

On the one-year anniversary of planting his first crop, Rob summarized his whole endeavor in retrospect, in a video with another whopping two million views: I Grew and Foraged 100% of My Food for an Entire Year! It’s easy to see why these videos are some of Rob’s most popular; the scope of his work and the meticulous approach he took are painstaking and purposeful, with incredible results.

And even if you, like most people, aren’t in a position to grow all of the food they consume, this might inspire just a few small steps toward living more sustainably. 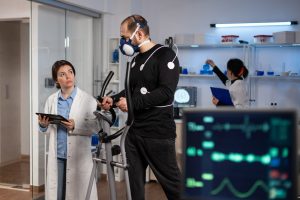