Diana Beresford-Kroeger is a biochemist, botanist, author and activist whose work bridges science with ancient Irish tradition and wisdom. With several books on gardening and trees that include for example, insight into why trees matter to various cultures–she appeals to a wide audience by translating the complexities of biological ecosystems into accessible language.

Canadian journalist Andrew Nikiforuk has spent time with Beresford-Kroeger and famously dubbed her the Jane Goodall of forests, after the famous primatologist, and wrote about her British Columbia’s journal, The Tyee. In this excerpt he shares a glimpse of Beresford-Kroeger’s wisdom:

“She can tell you that the Laurel tree has always served as the best defense against tsunamis in Japan because their roots travel 30 feet down into the ground. The balsam fir, which the Cree called pikowahtik, releases antibacterial compounds in its aerosols. The green needles of the white pine (Pinus strobus) make an excellent treatment for bereavement and sadness. It, too, serves as hospital for boreal songbirds. The kingnut hickory (Carya laciniosa), her all-time favourite tree, was used by Indigenous people as a source of primary protein. They regarded it as an anti-famine tree. And on she goes.”

Diana Beresford-Kroeger is truly a once-a-generation inspiration. Whose environmental work inspires you? 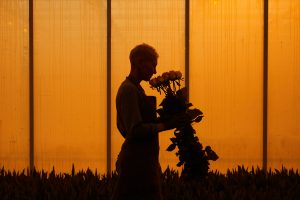