How Alcohol Can Make or Break Our Oral Microbiome

Our mouths house the second-largest and diverse microbiome or set of microbiota—the microorganisms of a particular site—in our body. That scope has enticed scientists: in recent years the oral microbiome, which is the collection of genomes from all the microorganisms in the mouth, has become a focal point for research. Like a fingerprint, each person’s microbiome is unique, and it changes over time. But alcohol consumption—through mouthwash, in particular—can make or break that delicate balance.

Science now provides new, powerful means of studying the oral microbiome—and helping us start to understand its role in the processes of the body. In “Oral Microbiome: Unveiling the fundamentals,” a  2019 paper in the Journal of Oral and Maxillofacial Pathology, Priya Nimish Deo and Revati Deshmukh broke down how mouth-dwelling microorganisms might work, and why they’re important to human health.

“The promotion of health or progression toward disease is critically influenced by the microbiota,” the authors write. “The oral microbiome…plays a crucial role in maintaining oral homeostasis, protecting the oral cavity, and preventing disease development.”

On a larger scale, Deo and Deshmukh explain the role that microbiota play in the human body as a whole, from metabolic to immunological functions and beyond. Specifically, they say, the health of the oral microbiome impacts digestion, metabolic regulation, the skin’s ability to serve as a barrier, and the body’s ability to balance inflammatory responses

But as we learn more about how complex the oral microbiome is, scientists have started to see how we’ve underestimated the impact of what we ingest on each set of microorganisms. Alcohol, as it turns out—and the alcohol and other ingredients in mouthwash, in particular—can upend the microbiome’s delicate balance. Many mouthwash brands include chemicals with powerful disinfectant properties. They act like an atomic bomb that doesn’t discriminate between the “good” or “bad” bacteria and organisms in our oral cavity, making the saliva much more acidic.

This significantly changes the environment, affecting our digestion (which starts in our mouth), disrupts the ability of our body to make nitric oxide (known as NO, which affects our cardiovascular health), and causes cavities, bad breath and imbalances among the bacteria in our body. This has been linked to IBD (inflammatory bowel disease), arthritis, pancreatic cancer and Alzheimer’s disease.

In terms of other sites in the body, we understand the gut microbiome a bit better, as there’s been more research about it. When we take a round of antibiotics, for example, we understand the effect this has on your gut. For the oral microbiome, some researchers liken using the mouthwash every day to being on antibiotics continuously—imagine the impact.

Does alcohol in general cause oral health issues?

Alcohol we drink affects our gut microbiome. And, according to a 2020 meta-analysis, the high degree of ethanol that comes with binge drinking is especially harmful, because it causes changes to the blood-brain barrier, which can lead to neurodegenerative disorders like Alzheimer’s disease.

While there is not as much research about the oral microbiome available as there is about that of the gut, imbibing occasionally appears to be less harmful than, say, using mouthwash in high concentrations. And in both cases—a glass of wine and a swish or two of Scope—have been found to be most harmful when combined with other risk factors like diet, stress and exercise.

More generally, though, even moderate amounts of drinking alcohol and tooth enamel don’t go well together. This is because alcohol is highly acidic and can dissolve the protective layer of teeth. With alcohol-based mouthwash, as we rinse our mouth, the teeth are exposed to the alcohol for longer—potentially negating the benefits of the product.

What should you avoid?

You don’t have to give up your mouthwash entirely. The most natural solution might be the ancient technique of oil pulling by using coconut oil, which has anti-inflammatory and antimicrobial properties. Researchers caution, however, that there’s not enough evidence to support the use of oil pulling alone but rather, that it’s a safe, natural addition to traditional dentistry (minus the mouthwash).

When looking for a healthier mouthwash option, check the ingredient list and avoid these disruptors: chlorhexidine, chlorine, alcohol, SLS, and cocamidopropyl.

What about oral probiotics?

Just like when we are working on rebuilding our gut flora, probiotics can help restore the balance of the oral microbiome and help prevent oral disease. But each person’s microbiome is distinct; it’s still best to consult with your medical doctor or dentist before embarking on a new regime of supplements. (For more on the role of probiotics in oral health, here’s one paper that offers a deeper look.)

In special circumstances, we need powerful disinfectants. But just like other powerful drugs, we should use them with caution. We are an organism living in a chemical world. Bacteria are a part of us and we need them to thrive and when it comes to health, the mouth plays an important role. Removing disruptors is the first step. The next is how to feed our bacteria well, so they—and we—can thrive. 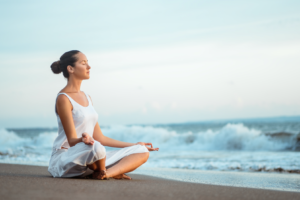 Is The Vagus Nerve the Key to Anxiety Relief?

Amid Growing Resistance to Antibiotics, Botanicals Could Offer a Solution

What Is CBD and How Do I Use It?